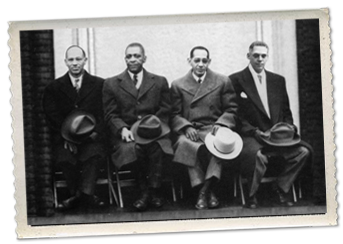 From the initials of the Greek phrase meaning, "FRIENDSHIP IS ESSENTIAL TO THE SOUL", the name Omega Psi Phi was derived. That phrase was selected as the motto.

Manhood, Scholarship, Perseverance and Uplift were adopted as Cardinal Principles.

On November 23, 1911 in Thirkield Hall, Love became the first Grand Basileus (National President). Cooper and Coleman were selected to be the Grand Keeper of the Records (National Secretary) and Grand Keeper of Seals (National Treasurer), respectively. Eleven Howard University undergraduate men were selected to be the charter members and Alpha Chapter was organized with fourteen charter members on December 15, 1911.

Cooper became the fraternity’s second Grand Basileus in 1912 and authorized the investigation of a proposed second chapter at Lincoln University, Penn.

Love was elected as the third Grand Basileus in 1912 and served until 1915. In 1912, Howard University officials did not initially recognize the fraternity as a national organization and Omega Psi Phi’s leadership refused to only accept local recognition. As a result, the fraternity operated without official sanction, until the university withdrew its opposition in 1914, the same year that the Beta Chapter was chartered at Lincoln University.

Omega Psi Phi Fraternity was incorporated under the laws of the District of Columbia on October 28, 1914.

"To you, our Founding Brothers - Just, Cooper, Coleman, and Love; You have passed away to heaven and to look down from above, We shall call to our dear memories the great works you have done We, the Ques, are marching on!"

To know and appreciate the history of the Third District, it is helpful to understand how and why districts in general were originally formed, their evolving impact on the organization of the Fraternity, and their related and evolving function.

From the founding of Omega on November 17, 1911, throughout its first decade, Districts and District Representatives as we know them today did not exist. The Grand Basileus was solely responsible for administering all facets of the Fraternity—a job that became increasingly more difficult as the Fraternity grew.

In response to Omega’s increasingly rapid growth, in 1922, the Eleventh Annual Grand Conclave, which met in Philadelphia, PA, authorized the creation of the Office of Vice Grand Basileus. At the time, the Vice Grand Basileus’ primary role was to assist the Grand Basileus with managing the Fraternity’s expansion. John W. Love was the first to fill the new position. Love immediately focused his efforts on working with existing chapters to increase membership while chartering new chapters that would expand Omega’s impact and reach.